The Carnival of Salvador is the biggest party of popular participation on the planet. Created and maintained by the people, it is a spontaneous and free manifestation, where the carnal, playful and physical mix with the emotion and swing of the Bahians who manage to renew the fun every year.

Revelers celebrate in three main circuits: Dodô (Barra–Ondina), Osmar (Campo Grande–Avenida Sete) and Batatinha (Historical Center). In 2013, the Afródromo was created, dedicated exclusively to the Afro and Afoxés blocks and with its debut in 2014, starting from the Commerce district. There is also carnival in the neighborhoods of Cajazeiras, Itapuã, Periperi, Plataforma and Pau da Lima. During the event, dozens of famous singers parade around electric halls—large trucks with lights and sound, above which the performers sing and dance. Among the attractions, the names of Bahian music stand out: Daniela Mercury, Ivete Sangalo, Claudia Leitte, Margareth Menezes, Bell Marques, Asa de Águia parading in various blocks, as well as traditional carnival blocks such as Olodum, Timbalada, Filhos de Gandhy e Ilê Aiyê. About two million people participate in the annual festivities that last nearly a week, immersing themselves in music and dancing. For sixteen hours a day, Brazilian popular culture reaches its maximum expression and local economy and Salvador receives an impulse of unequivocal proportions. 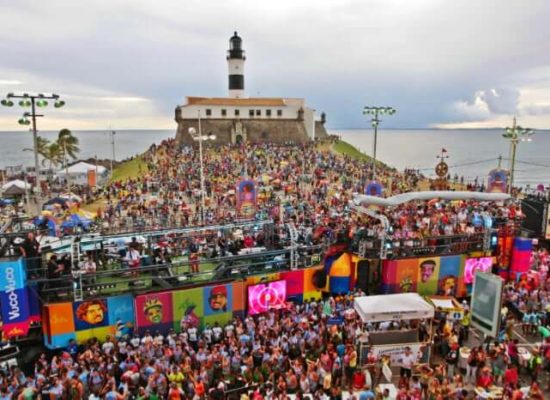 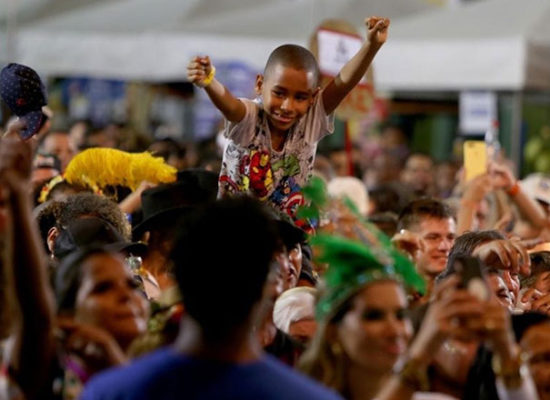 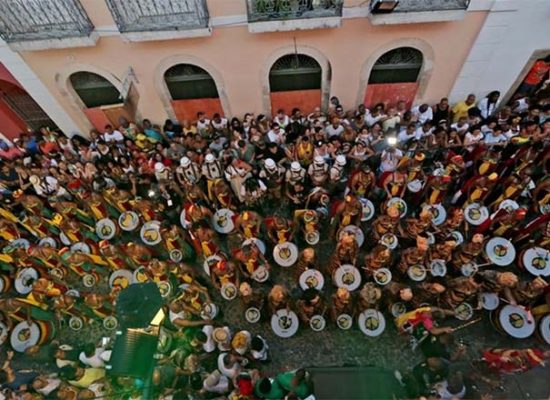 FOBICA: created in Salvador in 1950 by friends Adolfo Antônio do Nascimento (Dodô) and Osmar Alvares Macedo (Osmar). After observing the parade of the famous “Vassourinha”, a carnival entity from Pernambuco that played frevo on Rua Chile, they decided to restore an old 1929 Ford, known as a fobica. In Osmar’s mechanical workshop, it was decorated with several colored circles (confetti) painted and two plywood plates in the shape of a guitar with the words “Dupla Elétrica”. With a background in Radiotechnics, Dodô set up a source connected to the current of a car battery, which would supply the load for the operation of the speakers installed in the phobics. And so, in the middle of the afternoon of Carnival Sunday, the pair went up Ladeira da Montanha towards Praça Castro Alves and Rua Chile on top of the decorated and electronically equipped phobic, dragging thousands of people.

TRIO ELÉTRICO: adapted truck with sound equipment, weighing up to 35 tons, on average, with the structure for live musical shows for about 5 hours on each circuit of the Carnival of Salvador. The horsepower of the trailer’s engine that pulls the trio varies from 300 to 440 horsepower. The voice of the electric trio was just the guitar from Bahia and only came to have a singer after 1975.

SUPPORT CAR: It is the second truck that is part of the block, mostly reproducing the sound of the trio. It is also adapted, but with a structure to give comfort to revelers, such as bathrooms, bars and a medical clinic. Nowadays, many blocks offer special abadás (Abadás VIPs) for sale, which give the right to be on the upper part of the support car.

BAIHAN GUITAR: instrument created by Dodô and Osmar in 1942. Known primarily as an electric stick, it came to be called cavaco or trio cavaquinho and, in the mid-70s, it was redesigned and renamed with the name of Bahian guitar by Armandinho Macedo (son of Osmar). Voice of the electric trio for a long time, which only had a singer from 1975 onwards, the guitar started to have, in the early 1980s, a fifth string, differentiating it from any other instrument.

CORDAS (ROPES): Each block is limited by ropes, which are suspended by lambs, isolating the reveler from the external area of the block, giving him total safety and comfort.

CORDEIRO/CORDEIRA: These are men and women, duly selected and hired, to hold the ropes that surround the members of the trio. The lambs must keep the ropes suspended, ensuring the reveler’s safety and allowing the block to flow smoothly in the circuits. All are in uniform, receive personal protective equipment (PPE), such as gloves and hearing protection, and are divided by sides (right side, left side, front and bottom) so that the whole trio, support car and revelers are protected by the ropes .

ABADÁ: created in the 90s by the plastic artist Pedrinho da Rocha, the abadá came to replace the old and heavy shrouds (clothing). They are customized shirts for each block, which give the reveler the right to play inside the ropes.

PIPOCA (POPCORN): a group of revelers who do not have abadás, but, as Salvador’s carnival is very democratic, it has space for everyone. Therefore, popcorn revelers enjoy outside the trio and often accompany their favorite artist throughout the circuit. The Chiclete popcorn – a block pulled by the singer Bell Marques until 2014 – became known as the largest of all circuits in Salvador.

CAMAROTES: These are structures around the circuits, for those who prefer more comfort to enjoy the carnival. The cabins provide the reveler with a privileged view, with an interior equipped with nightclubs, lounges, baianas de acarajé, numerous restaurants, abadás customization, a beauty salon and even a SPA, in addition to exclusive shows.

ALTERNATIVE CAMAROTE: These are apartments located along the circuits of the momesca revelry, which during the carnival are rented to revelers who want to see the artists up close without leaving home. They function as a real alternative box and are often decorated with messages to musicians who pass through the circuit.

INDEPENDENT TRIO: These are electric trios that cordlessly parade through circuits to the delight of the popcorn revelers. The independent trios always bring renowned artists and count on the support of the City Hall, Saltur, the State Government and partner companies.

MEMBER PARTNER: It is the reveler who joins a group. He pays the monthly fees and has the right to go out and enjoy all the comfort and security of a block.

COMMISSIONER: They are people qualified to sell the abadás of the blocks.

DELIVERY OF ABADÁS: The delivery of abadás of blocks and cabins is usually made seven to 15 days before the carnival. A superstructure is set up in various corners of Salvador for the reveler to receive his kit containing his abadás, gifts and bags.

AFROS BLOCKS: These are blocks that exalt and value black culture, bringing a lot of drumming, charm, dance and poetry to the circuits. The difference is that they do not use abadás and, because they are faithful to their origins, they use traditional fantasies.

MOMO: According to the History of Art, an actor who played in the popular farces of the old theater. Originating from the fools in charge of entertaining the Portuguese masters and gentlemen who inhabited the royal palaces and noble residences with mimes and popular farces. At carnival, King Momo receives the key to the city and becomes guardian during the days of momesque revelry. At the Carnival of Salvador, the officialization of the King Momo took place in 1959 on the initiative of Rádio Excelsior, although the contest had also taken place years before at ballroom balls, which personified the figure of the irreverent Greek god. In 1990, the Bahia Federation of Carnival Clubs bought the rights to promote the election and elected the first momo chosen by vote. Currently, the contest is promoted by the Bahia Federation of Carnival Entities, with support from the City Hall and the Municipal Council of Carnival (Comcar).

HARLEQUIN: character from the old Italian comedy (commedia dell’arte) – in a multicolored costume and made in general of rhombuses with the function of entertaining the public during breaks, with jokes and buffoons – he was later incorporated as one of the characters in the adventures of comedies becoming one of its most important characters. Columbine’s lover. Hoaxer, bully, braggart, bully, lover, cynical.

COLOMBINA: Main female character of the commedia dell’arte, lover of the Harlequin and companion of Pierrot. Flirt, happy, futile, beautiful, smart, seductive and fickle. She was dressed in silk or white satin, a short skirt and a little cap.

PIERRÔ: Character also from the commedia dell’arte, naive and sentimental. He wore very ample trousers and jacket, decorated with pompoms and with a large ruffled collar.

FURDUNÇO: movement created by the City of Salvador in 2014 to value small equipment and cultural events on the ground, rescuing old carnivals.

CHANGE OF GARCIA: officially appeared in 1959 as a social and political critic in Garcia, where great afoxés, samba schools, batucadas, cordões and blocks of indigenous people had originated. It would have been born of a dissent from another block, but its story has two versions. The first would have been created by councilor Herbert de Castro, who goes to the streets with the community with carts pulled by donkeys, pots and pots to protest the lack of water, light and asphalt – a parade that sensitizes the city hall to perform the services. Another version is the appearance in the 20s and 30s and its name alludes to the expulsion of a prostitute who had moved to Rua do Baú on a Monday of Carnival.

MICARETA: off-season carnival. The first to be held in Bahia and Brazil was in the municipality of Jacobina in 1912. Two years later, Salvador also started hosting the party (called by the Salvadorians as micareme), which at first took place in the middle of Lent, when the rain hindered the parades of the momo days. The name micareta only appeared in 1935, through a contest promoted by the Associação dos Cristas Carnavalescos.